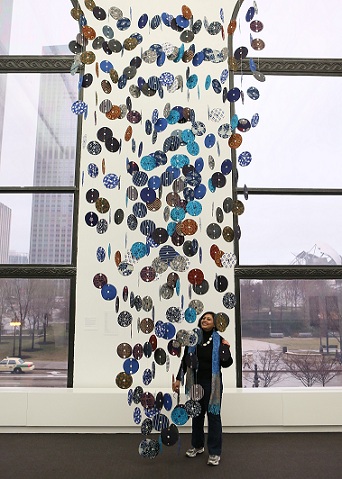 My work focuses on Gandhi’s ideology of nation building for creating moral and peaceful societies, relevant for 21st century, connecting past with the present.

My work as an artist is centred on historical iconographic elements within the cultural context of Indian history. I explore and construct the hermeneutics of period histories, its contemporary representation of socio-political enquiry within my art practice.
With my academic background in English literature, formal training in fashion designing and clothing technology, my artworks interconnect art, design and critical theories. I collaborate with the 9th or 10th generation of Ajrakh artisans who migrated from Sindh and Balluchistan in 1600 CE but still carry on with ancient textile traditions of printing and dyeing in Bhuj, Gujarat.
Invoking such traditions, I bring together khadi as a fabric, Ajrakh textile traditions and skill of the craftspeople giving my own interpretation in a visual form. Working with various media and excavating from history, my art celebrates the subaltern.Image details: Site-specific Installation,
Indigo Narratives 2009-2014, 30 feet high, 300 Ajrakh printed buttons, 8 inches diameter
Installation shot at Chicago Cultural Centre IL, USA, 2013 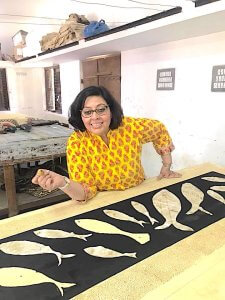 As an artist, designer and a poet, to be creative is a contemplative act that distils an essence about my own total reality. In various phases of my life, I have been inspired by different subjects. My first love was reading the English classics and that led me to study English literature. Retailing kids wear garments in domestic market led me to train myself as a fashion designer in the early 90s. As a designer, I created the haute couture women wear collections under my own label for many years till I merged my designing career with visual arts in 1999.

My earlier select visual artwork projects were influenced by Abstract expressionism on a title Lyrical Abstraction: A room of/for muses 2007 series. Beyond Mithila: Exploring the art of decorative  2008 were influenced by 7th and 8th-century art forms of India, it contemporary interpretations and appropriations.

In 2008 I collaborated with Chicago based American-Japanese artist Laura Kina in a two-person exhibition titled Indigo Narratives. As an Indian artist, my reference was the 19th-century indigo revolt in eastern India, Neel bidroh.  Gandhi’s subsequent intervention, the Champaran movement of 1917-18, was his first satyagraha on Indian soil after he returned from South Africa. The farmers of eastern India were forced to grow indigo crops for British/Eurocentric needs and lived a life of oppression, drudgery and subjugation for hundreds of years. In this work, I touched upon socio-political narratives of that period inspired by a play titled Neel Darpan (1857) written by Deen Bandhu Mitra. Furthermore, I explored indigo as a plant colour and dye. As a designer, my passion for Indian textiles also propelled me to explore the ajrakh textile traditions, ajrakh means indigo in Arabic.  I created my first artworks experiencing and learning about the magical reverse block printing technique with natural colours that can be traced back to Indus Valley civilization. I met Junaid Ismail Khatri, son of Dr Ismail Bhai Khatri who assisted me in my indigo project. The journey of indigo in my work began in 2008 and has remained one of my primary means of artistic expression.

Salt – The Great March 2013, I delved more deeply into the possibilities of establishing alternative societies where Gandhian ideals of swadharma and sarvodaya could be adhered to and sustained with sincere implementation. I was investigating – can swadharma become a movement for uplifting societal values? And, if so, how could textiles, both as material objects and artistic forms be used to “stitch together” communities otherwise separated by the tensions, violence and degraded human values. I created installations of khadi with Sanskrit calligraphy, giving a kinetic look in the form of structured sails, depicting the walk of Gandhi and hundreds of volunteers before beginning the famous Dandi/salt march. What I mean by ‘swadharma’ within the context of my works is the ‘adherence to one’s moral duty’ towards the society and unto oneself, pushing its meaning towards the ‘performative nature of duty’ which is done voluntarily, wholeheartedly with a sense of purpose that would eventually make an individual happy and contented.

The genesis of the next show The Khadi March: Just Five Meters was a quote from Gandhi’s speech ‘If you can ensure them three annas instead of the three paise that they get today, they will think they have won Swaraj. That is what Khadi is trying to do for the spinners today. (Harijan, 2-1-1937)

I felt the need to consider the concept of five meters/yards of fabric, the basic length needed to cover oneself. I explored the idea of how thirty crores urban population could bring on another social movement effortlessly by buying five meters once a year as a swadharma towards the country. The featured works in this exhibition have two aims, one to touch upon the idea of swadharma towards country, and secondly, to explore a solution to help bridge and connect the urban population with rural people that make up seventy per cent of India’s population. It was a call for action for urbanites to engage with weavers, spinners handicraft makers. The use of khadi installation as topis, jackets, and flags in this exhibition is used both as a symbol and as a material that expresses qualities of self-purification, self-reliance and independence.

The most recent chapter of my journey, Bound by duty: An idea of Swaraj and collectiveness2018-19, was an idea of the ethical and spiritual self as a foundational source for bringing about social changes and emancipation. I turned to Gandhi’s most important work Hind Swaraj1 to seek answers to my own dilemmas.  I wished to understand the meaning and salience of the relationship between self, swadharma, swaraj and social transformation. This was particularly appealing to me considering how technology has entered our lives and how empowered we are in today’s world as citizens who can be so connected to others globally.

I examine the elements of Gandhi’s critique of modern civilization, noting his emphasis on an evolved ethical and spiritual self for creating an alternative perspective of a better world. I continue to explore the idea of swadharma, where one does not have to await a social revolution to create better societies, and, that a better world cannot be sustained without work on the self. Swaraj (self-rule) has to be experienced by each person for themselves, and to further add that ‘real home rule is self-rule or self-control.’ My inspiration is akin to a micro-organism school of fish where trillions collaborate together undersea, displacing water to create ocean currents and waves. I examine the idea of ‘collective impact’ or ‘collectiveness’ in societies that are evolved ethically and spiritually, to bring social changes for better alternate societies. In this exhibition, I am attempting to, in essence, build an “aquarium of fish” with ajrakh printing, natural dyes and needlework in an installation where shades of blue khadi fabric symbolize the water body that is the genesis of the beginning and end of life

I am also invited to read papers for national-international conferences on titles ‘Gandhi’s thought leadership in relevance to the 21st century through textile art and installations’, Salt and Indigo: A visual Translation of Colonial India and Lincoln Gandhi and Obama: A visual dialogue in the miniature style of paintings. The new academic works were created in miniature painting style and are installed as permanent exhibits at International Lincoln Centre, Shreveport, USA