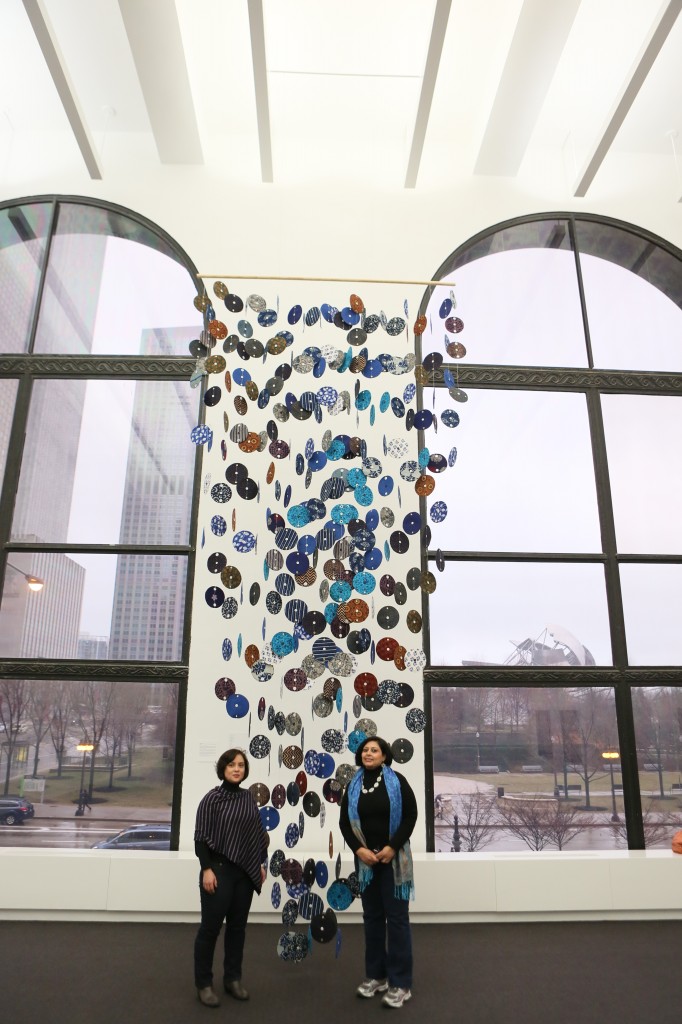 Laura Kina’s Devon Avenue Sampler is a portrait of her diasporic South Asian/Jewish Chicago neighborhood of West Roger’s Park and features a bricolage of pop street signage rendered in patchwork quilt paintings by the artist as well as works that were hand embroidered by artisans from MarketPlace: Handwork of India, a fair trade women’s organization in Mumbai, India.

Despite coming from vastly different backgrounds, Jyoti and Kina decided to collaborate in 2008 after seeing that they share a mutual interest in textiles, pattern and decoration, and Asian history. They began by thinking about the Silk Road intersections of their own ethnic and national positions in relation to fabrics. Jyoti lived for many years in Gujarat India, a region famed for their bold embellished textiles and as the home of Mahatma Gandhi. Kina was born in California to an Okinawan father from Hawaiʻi and an Anglo/Basque American mother from the Pacific Northwest. She now lives and works in Chicago’s “Little India,” a vibrant multiethnic immigrant community.

The common thread between their complimentary bodies of work is the color indigo blue from India’s torrid colonial past, to indigo-dyed Japanese kasuri fabrics and boro patchwork quilts, through blue threads of a Jewish prayer tallis, to the working class blue jeans in the United States.

The show has been written by leading newspapers, magazines, TV and critiqued by well-known Indian and international art critics.

view Shelly Jyoti’s work : https://shellyjyoti.com/indigo-narratives/
view  laura kina’s works : http://www.laurakina.com/devon.html
link to our video about the project: http://www.youtube.com/watch?v=u-cRlQjBowQ&feature=player_embedded
The fair trade organizations laura kina to produce some of my works is: http://www.marketplaceindia.com/
One of the orgs Shelly worked with is Shrujan Threads of Life: http://shrujan.org/