I know not, Flicker a few blinks wide, Flutter a few winks more, I am static

What is time, I know not

For Shelly Jyoti, the act of revisiting her works during the period of the pandemic turned into a much greater exploration of the philosophical and sociological concepts she has been delving into over the past decade. Much of her multidisciplinary research and practice has had at its core, a deep acknowledgement and inclusion of Mahatma Gandhi’s teachings on collective consciousness.

While her usual process involves the physical act of working with artisans, in printing on flowing textiles with ajrakh, the lockdown didn’t prevent her from articulating her creative expressions through other means; being a writer and a maker, the duration spent during the pandemic shut off from the world, became one of contemplation and creation, as her drawings and doodles sprang to life in the company of text and image. 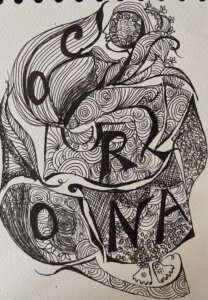 Drawn to the complexity of the time humanity was passing through, Jyoti turned towards interrogating the very representation of time through history, and the symbolic confluence of concepts and ideas that connect world civilisations.

The symbology to be found in her own textile artworks finds connection with universal forms that are also profoundly rooted in the cultural ethos of the subcontinent. These are motifs and designs that are birthed from reservoirs of knowledge, and can be revisited time and again with no diminished impact, but instead, offer new meanings.

Looking at the current Epoch through the lens of human experience and visual tropes, Shelly Jyoti began to revisit her past works, particularly the prominent series’ exploring Gandhi’s four philosophies of svadharma, sarvodaya, svadeshi, svaraj. Her decision to create mixed media works on familiar images of her previous narratives somehow renders the cycle of experience continuous and transitioning; as she follows the thread of life that transcends time and medium, she is bridging her own sense of understanding from past to future, from self to community. Time, Rebirth, Iconology – these concepts form the underlying mapping of this series of experimental works

The works reflect a true rediscovery and reincarnation of earlier themes, but also bring fresh perspectives for her as an artist, as she sifts through an engagement with new realities and materials. In the series “Rebirth: The Golden Boat of Life”, Jyoti infuses the imagery with movement; the picture planes recall ancient seafarer’s maps, acknowledging also the physical and metaphorical journey that we all take as humans. The textural physicality of the gold thread connects with richness and beauty, and perhaps allows us to reflect on the value of life in its time-bound framework.

The circle is a primary motif in design, and always central in sacred and cosmological diagrams. As a form it recurs in Shelly Jyoti’s work. Here it indicates continuity and the cyclical quality of history, of epochs – it also implies the relationship between the microcosm and macrocosm. 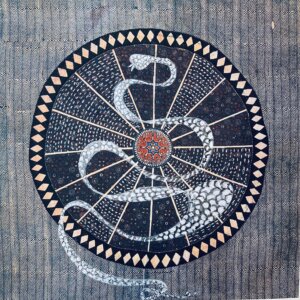 Jyoti’s series on The Wheel of time or Kalachakra is a powerful rendering of a concept existing in several streams of spiritual understanding including Hinduism, Sikhism, and Buddhism. The concept regards time as consisting of repeating ages. She explains – ‘The use of snakes is a symbolic in our Vedic literature. In ‘Puranas’, ‘sheshnag’ is said to be holding the planets of the universe, balancing earth on his head. It is said that when the primordial serpent uncoils, time moves forward and when he coils back, the universe ceases to exist.’

The pandemic has been a slice of time when disorientation and fragmentation were primary sensations, and each individual found ways of dealing with it. The series ‘Rebirth’ with the Koi fish as central motifs talks about the consciousness of the Self, of introspection, discipline and self-care-  things that have monopolised thoughts in this precarious situation of sickness and death. Jyoti mulls over the body, it’s survival and the precious breath that keeps the stasis.

For Jyoti, the concepts of Swaraj and Swadharma guide the way she looks at society, and how an individual participates in collective well-being. Some of the works in the series elaborate on these notions of interdependence, and of humans being able to reach out to those with lesser privilege around them. Both, her work with indigenous artisans, and her belief in the local as an artist and fashion designer, have framed the series ‘Rebirth-Make in India’. 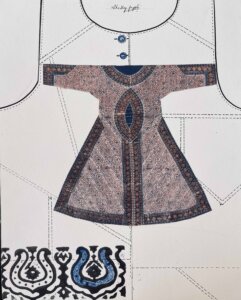 The framed silhouettes of the ancient ‘ang-rakha’ tunic recall centuries of textile production, dying and stitching, also drawing attention to the communities that need our support in these trying times.

‘The idea of kintsugi 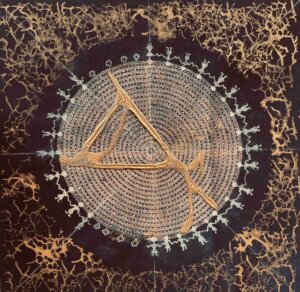 was inspiring in the present fractured times of global pandemic’ she says. This evocative series speaks about transforming what is broken into something whole, and special. Fitting together pieces of a puzzle, to create a fresh fabric of life.

In compiling this series of paintings, drawings and poems, Shelly Jyoti has delved into both a theoretical engagement with the present times, and a personal, artistic and cathartic response to her experiences and those of society as a collective.

Communities to come together To heal, design and weave

The new fabric of life Sediments of humanity

Hung on the fossils of threads” (Shelly Jyoti, excerpt from poem)