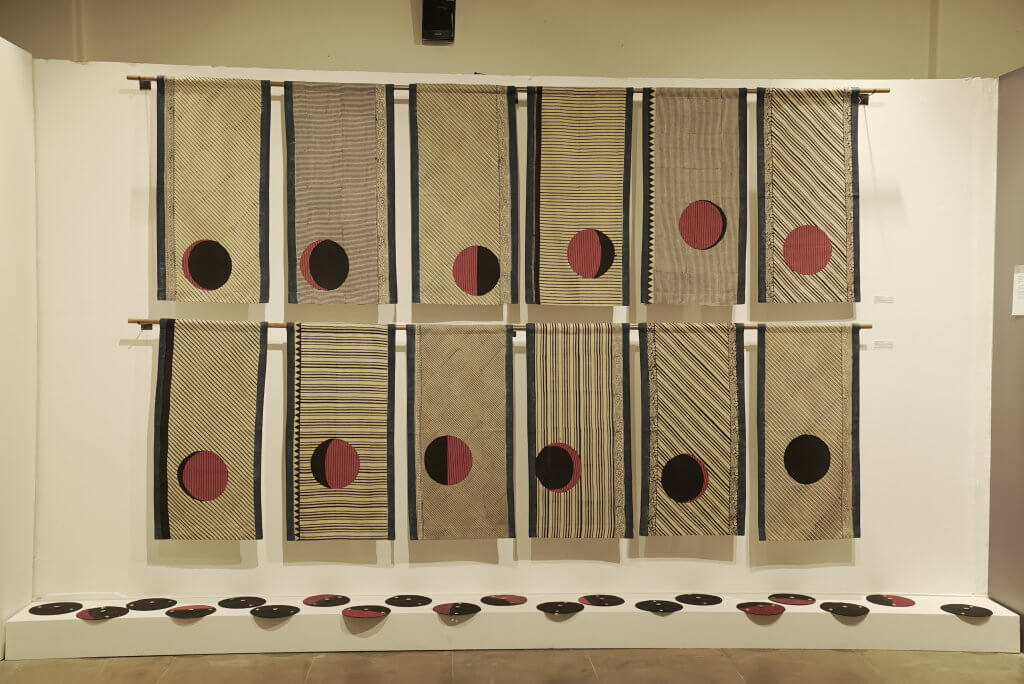 Bound by Duty: An idea of Swaraj and Collectiveness 2018-19 is an exhibition that attempts to highlight important Gandhian principles and practices in the light of time-binding, with the capacity to summarize, digest and appropriate the labours and experiences of the past for the benefit of the present and the future generations. The idea of Swaraj is timeless, whether Gandhi’s narration of Hind Swaraj critiquing western modernity or Tilak’s famous quote “Swaraj is my birthright” or Swami Vivekananda referring to Swaraj as internal awakening during Arya Samaj movement in early 20th century. Although without alluding to the specific historicity of events, Swaraj, swadharma,sarvodaya  seems eternal and embedded in time.
I am inspired by the powerful moon that orbits the earth, changing its appearance due to its position in relation to the earth and sun. The moon changes its structure after every 29 days and its cycle of repetition.  To me, the crescent of the moon has an alluring beauty, legend, and a timeless quality. 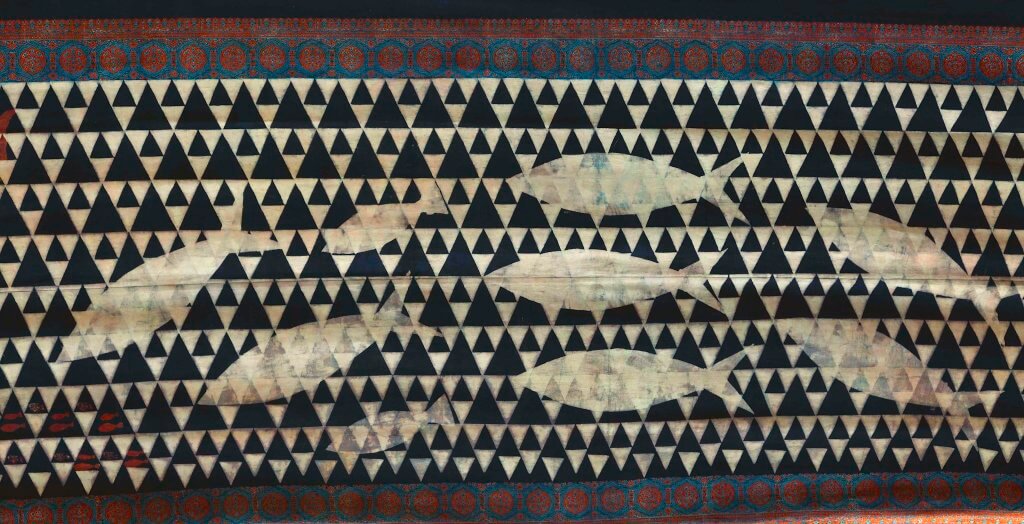 Eight panels 20×6 (app) feet long each is created with Ajrakh printing and dyeing on khadi representing sequential movement and alludes to the nature of oceanic currents itself.

It calls to my mind the endless ebb and flow of tides, the continual revolution of the sea and the state of perpetual motion created when millions and trillions of fish school together. The gradually folding of schools of fish and merging of hues of indigo blues and madder amalgamate to make a whole, akin to water as the beginning and end of life. Civilization and Collective Forces is inspired by the idea of collective community emphasizing human worth in comparison to modern civilization, where the principal of purshrath becomes a search for fulfilment in the present material world and which places a larger emphasis on material comforts.

Gandhi wrote,’ Civilization is that mode of conduct which points out to a man the path of duty.’ Performance of duty and observance of morality are convertible terms. To observe morality is to attain mastery over our mind and passions. So, doing so, we know ourselves’. This installation depicts that sense of collectively where an increasingly aware civilization experiences cleaner water.

Bound by Duty: An idea of Swaraj and Collectiveness

‘These views are mine, and yet not mine. They are mine because I hope to act according to them, they are almost a part of my being. But, yet they are not mine, because I lay no claim to originality. They have been framed after reading several books’ M.K Gandhi

The reason to create this installation is to reach out to masses with a text that was written 100 years ago and exploring the relevance 100 years later. I thought hard in bringing out this installation for many reasons, and then I thought, it would be unfair not to share my thoughts and processes that inspired me most to create ‘Swaraj and Collectiveness’

I turned to Gandhi’s most important work Hind Swaraj1 to seek answers to my own dilemmas. Inspired by the idea of social responsibility, I hoped to understand the meaning and importance of the relationship between self, societies and social transformation in our fast-paced technology-driven world.  I was seeking a response to the idea of swadharma as a notion of patriotism.

I also wished to understand the ways in which a modern civilisation such as India, that has achieved so much economically and has become such a significant culture and country globally, could still connect with seventy per cent of her rural population that still remains illiterate. It is in this context that I eventually decided to re-read key writings of Gandhi for insights, as in his world the ethical and spiritual self is embedded in the realm of political struggles for justice.

My works from 2009-2018 explore Gandhi’s message to humanity and my engagement with craft communities.

Bound by Duty: An idea of Swaraj and Collectiveness
The wheel of swaraj
5×7 inches 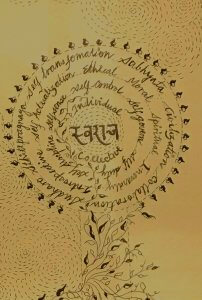 These views are mine, and yet not mine. They are mine because I hope to act according to them, they are almost a part of my being. But, yet they are not mine, because I lay no claim to originality. They have been framed after reading several books’ M.K Gandhi

Hind swaraj is like a seed text, that comes alive with every generation. And before it extinguishes, life within the seed starts germinating after lying still and dormant, it begins its journey again.

This artwork has 25 words that have a profound impact on my understanding the text of Hind swaraj which was written in two languages, Gujarati and English. In fact, each word though inspiring, all seemed interconnected with Gandhi’s core philosophies of swadharma, swaraj, sarvodya, swadeshi, satyagraha, khadi and relate to our Vedas/Upanishads

The wheel of swaraj is eternally relevant to all generations 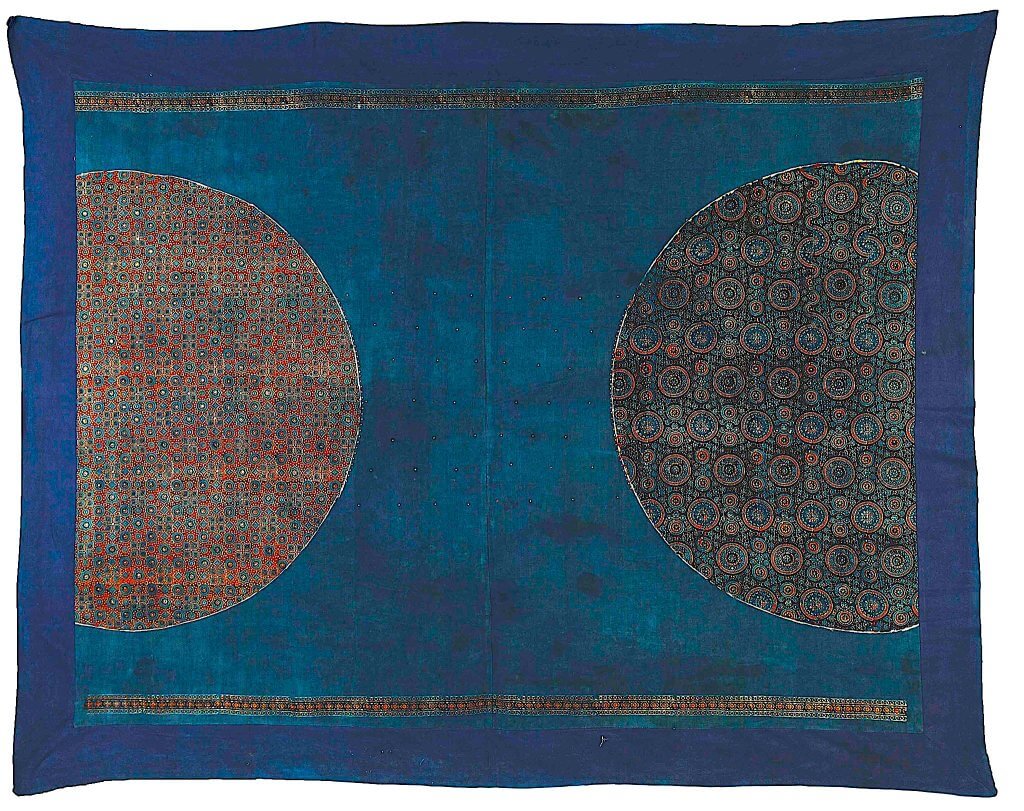 Bound by Duty: An idea of Swaraj and Collectiveness
Lunar swell: A Dusk moment and terminator
36x50inches
Ajrakh printing and dyeing on khadi
2019by the optical transitory illusionary line, the dusk moment between light and dark hemispheres, I feel that it is a “dusk” moment for us in the early 21st century.  Considering how technology has taken over many of our lives, I question how we can be self-aware enough to eschew the temptations that modern civilization offers, and consider how we measure success, progress and development in material terms?

Gandhi wrote Hind Swaraj with the backdrop of 20th-century events like world war1, the Holocaust, Stalin’s repressive regime, Pol Pot’s genocide, atrocities in the name of religion worldwide, repression of individual freedom in the name of fundamentalism and much more. That was his transient moment of understanding where modern civilization was heading for, and Hind Swaraj was conceived in this background as a critique of European /western modernity.

As a reader, today it’s a dusk moment for us in the early 21st century, considering how technology has taken over our lives. It’s is an idea of being self-aware enough to eschew the temptations that modern civilization offers, and consider – how do we measure success, progress and development with material terms?

Just like the lunar terminator is the boundary between the illuminated and darkened hemispheres, this artwork is inspired by the optical illusionary line in the dusk moment as the transient instant defining the light and dark. 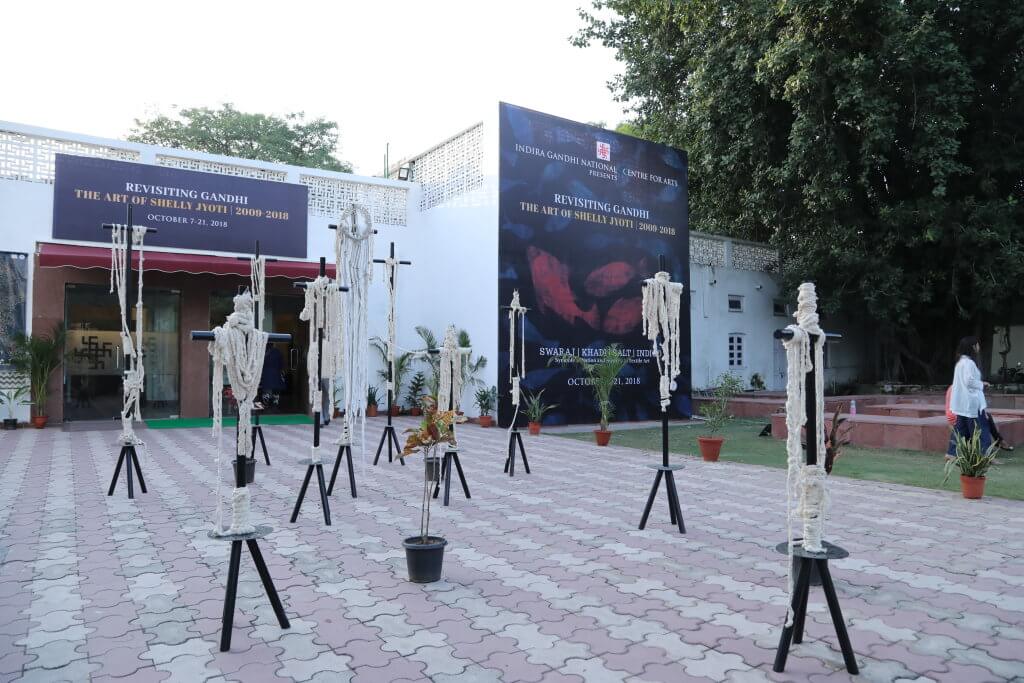 Gandhi is well known for ‘Satyagraha’, an approach to attending to injustice through non-violent means. In Hind Swaraj, Gandhi explored the need for individuals to cultivate their dharma. These ideas developed in South African protests grew into a politics of collective action in the Dandi March in 1930. Individuals who have cultivated satyagraha may act in a collective with great impact.

This installation of 10 structures is an idea of collective impact and understanding the meaning of Swadharma /the quest for truth. When an individual can introspect and  work towards being contributor, rather than a consumer in society; the result of the action manifests ten-fold as the number of like-minded individuals increase.

The structures represent various types of groups/ strata as well as individuals in our country- be it rural, urban, social, economic, religious, spiritual, public or private. The connecting threads of khadi yarn represent the interwoven spirit, culture and history of all parts that make India.