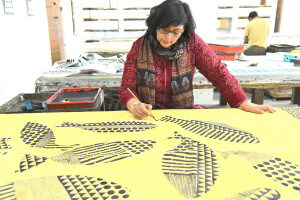 Within my art practice, my work focuses on Gandhi’s ideology of nation building for creating moral and peaceful societies, which I find ever relevant in the 21st century – connecting past with the present. I turned to Gandhi’s most important work Hind Swaraj1 to seek answers to my own dilemmas. Inspired by the idea of social responsibility, I wished to understand the meaning and importance of the relationship between self-societies and social transformation in our fast-paced technology driven world. I was seeking a response to the idea of swadharma as a notion of patriotism. I also wished to understand the ways in which a modern civilisation such as India that has achieved so much economically, and has become such a significant culture and country globally, could still connect with seventy percent of her rural population that still remains illiterate. It is in this context that I eventually decided to re-read key writings of Gandhi for insights, as in his world the ethical and spiritual self is embedded in the realm of political struggles for justice. He led satyagrahas for millions of poor peasants and workers against colonial rule. Yet he treated the ethical and spiritual self as a foundational source for bringing about social and political emancipation.
I ask these questions because, as a critic of the current state of the world, I have not been entirely satisfied in recent years with my own response to the question whether another world is possible, how it should be envisaged, and how it can be realised. He also taught that individuals do not have to await a social revolution and, conversely, that a better world cannot be sustained without work on the self. This is where I have found Gandhi’s Hind Swaraj or Indian Home Rule enlightening. My works from 2009-2018 explore narratives of pre-independence history, colonization, Gandhi’s message to humanity and my engagement with craft communities.