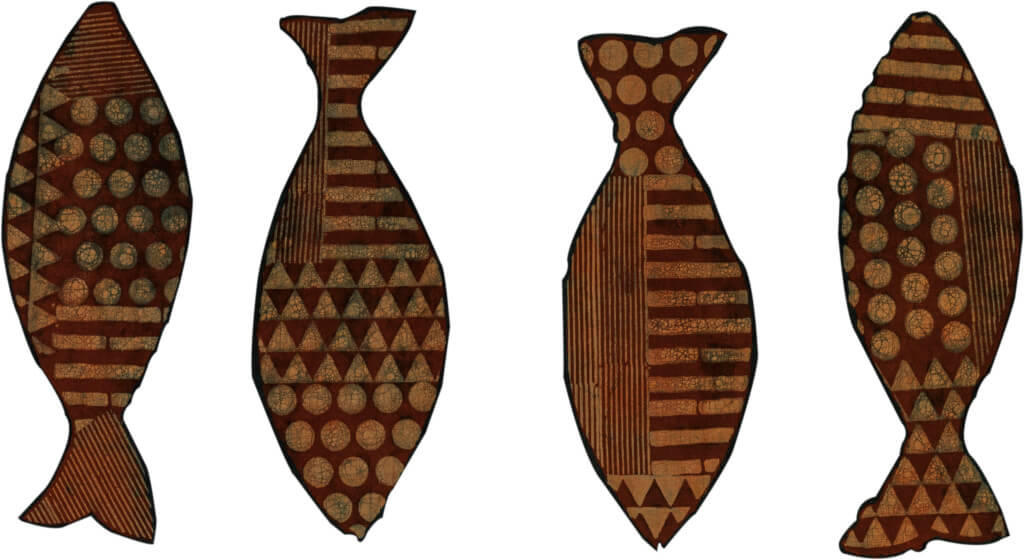 Born on the western coast of the Kathiawar peninsula, in what is now the state of Gujarat, Mohandas Karamchand Gandhi (1869-1948) was born in a town that had been an ancient trading post from Harappan times (1600-1400 B.C.E) and later sent goods across the Arabian Sea to the Middle East and Africa. It is little wonder therefore that Gandhi would find the sea an important feature of his life—a force shaping his life and politics in a variety of ways.  Shelly Jyoti explores the power of individual duty and collective action in her most recent show, Bound by duty: An Idea of Swaraj and Collectiveness.  Here Jyoti revisits Gandhi’s focus upon individual action, or the performance of dharma, alongside the power of collective action.

Gandhi’s earliest formulations of non-violent resistance, or satyagraha, took shape not while he was in India, but instead while he resided across the Arabian Sea in South Africa. Returning from India in 1896, Gandhi found himself arriving in South Africa at a time when the public was considering a bill that would restrict Indians from political representation.  On December 18, 1896, the ship he was traveling upon, the Courland, arrived off the coast of Durban and dropped anchor.  It was customary for ships to await certification that passengers were allowed to disembark.  But, Durban officials quarantined the travelers of the Courland for a longer period than was usual under the guise that the ship’s passengers were potential carriers of plague that had broken out in Bombay.  Some of Durban’s most influential residents sought to intimidate the Indian travelers, but especially Gandhi in particular, in the hope that they would return to India.  During the period of their quarantine, advocates of restrictions on Asian migration spread unfounded rumors hoping to garner the support of their neighbors and the government in their efforts to restrict Asian immigration.  They claimed that while in India, Gandhi had ‘indulged in unsubstantiated condemnation of Natal whites’.  They also promulgated the lie that Gandhi had recruited Indians to return the South Africa as settlers.  As a result, the passengers of the Courland allowed to disembark only after the quarantine was ended in January of 1897, some three weeks later after the travelers had arrived.  After the government acquiesced to the demand to allow the passengers to land, Gandhi was attacked. When he declined to press charges against his assailant, few understood why.  Had Gandhi’s  time at sea brought clarity to his  thinking about injustice?

The sea would again provide a fruitful context for the development of Gandhi’s thinking.  This time Gandhi was returning to South Africa from London on the SS Kildonan between 13 and 22 November 1909 when he wrote Hind Swaraj, or Indian Home Rule.   The treatise takes the unusual form of a dialogue between a fictitious newspaper Editor and his Reader.  Together, they  discuss many important questions of the period.  Hind Swaraj explores four inter-related ideas:  India’s self-rule cannot be achieved through the adoption of a British-styled society; India’s self-rule can only be won through passive, not violent, resistance; India’s passive resistance must be grounded in the practice of self-sufficiency; India can only be free if it rejects modern civilization, which is devoid of morality.  The Gujarati original, which was published in the pages of Gandhi’s newspaper Indian Opinion, was banned in India by the British government.  An English version of the work appeared shortly thereafter, circulating among India’s political elite.

Several years later, while traveling to England and India in August of 1914, Gandhi described himself as at sea when news reached him about the outbreak of World War One.  He was both in the English channel and uncertain about whether participation in war was ever justifiable.  Gandhi had struggled previously on two occasions over war.  His first consideration of war occurred during the Boer War (1899-1902), which pitched British interests and settlers against Dutch interests and settlers of South Africa, known as the Boers.  Gandhi had been deeply conflicted about supporting war, but eventually concluded it was his duty as a British imperial subject to support the British side.  Rather than take up arms against the Boers, Gandhi raised an ambulance corps of Indian volunteers to tend to the wounded.   Only a few years later, the British in South Africa again faced a significant challenge to their power; this time their opponents were Zulus, who rebelled in 1906. In this case, Gandhi encouraged South Africa’s Indian community to volunteer for military duty.  When British authorities turned down Indian recruits, Gandhi returned to assisting the wounded.  He led 24 stretcher-bearers to treat the wounded on both sides of the conflict.  Years later as he considered the outbreak of a European war, Gandhi recalled the torture scars he saw on African bodies.  The violence that Gandhi witnessed during the Zulu rebellion haunted him for decades afterwards, making him wonder if violence, even to protect British interests, could ever be justified.

At sea in the English Channel as World War broke out in 1914, Gandhi, like many Indians, considered whether to support the war effort or to withhold service until an unjust colonial authority was ameliorated.  Eventually, Gandhi concluded that ‘England’s need should not be turned into our opportunity and that it was more becoming and far-sighted not to press our demands while the war lasted.’ Before his own health forced his return to India, Gandhi again began organizing an Indian medical corps for the war front.  After his return to India, Gandhi went so far as to support military recruitment efforts in India, believing that the British would surely reward India for its contributions and sacrifices after the war was won.

The sea would play a transformative role in Gandhi’s politics  in 1930 when he sought to challenge the legitimacy of British taxes on salt.  Embarking on his Dandi March from his ashram in Ahmedabad on 12 March 1930, Gandhi sought to draw national and international attention to British injustice.

We believe that it is the inalienable right of the Indian people, as of any other people, to have freedom and to enjoy the fruits of their toil and have the necessities of life, so that they may have full opportunities of growth. We believe also that if any government deprives a people of these rights and oppresses them the people have a further right to alter it or abolish it. The British government in India has not only deprived the Indian people of their freedom but has based itself on the exploitation of the masses, and has ruined India economically, politically, culturally and spiritually. We believe therefore, that India must sever the British connection and attain Purna Swaraj, or complete sovereignty and self-rule.

While the march began with Gandhi and seventy-eight of his most trusted satyagrahis, hundreds joined the march along its 390 Kilometer route to Dandi, which took twenty-four days to complete.  Once there at the sea at Dandi on 6 April 1930, Gandhi and his supporters broke the law by making and selling salt.  In doing so, they drew attention to the injustice of the law, but also the power they possessed as individuals engaged in non-violent collective action.  After Gandhi’s arrest less than a month later, millions more were inspired by the protest.  What had begun as the individual action of eighty satyagrahis quickly turned into the action of a new collectivity.  At the sea, Gandhi demonstrated for himself, his followers, and millions in India and around the world the indisputable power of collective nonviolent action.

At the root of Gandhi’s political success was his ability to enable people to recognize their individual duty to themselves and one another and then to act accordingly.  Shelly Jyoti’s exhibition brilliantly expresses the power of Gandhi’s thought through Ajrakh embellished textiles with signs of the sea.  The power of collective action, like the schools of fish Jyoti has selected for this show, was an outgrowth of the millions who moved in unison performing their duty to themselves, their neighbors, and their fellow countrymen during the struggle for independence from British rule.  Individual action, when performed alongside others, produced power that exceeded the simple sum of the individuals involved. 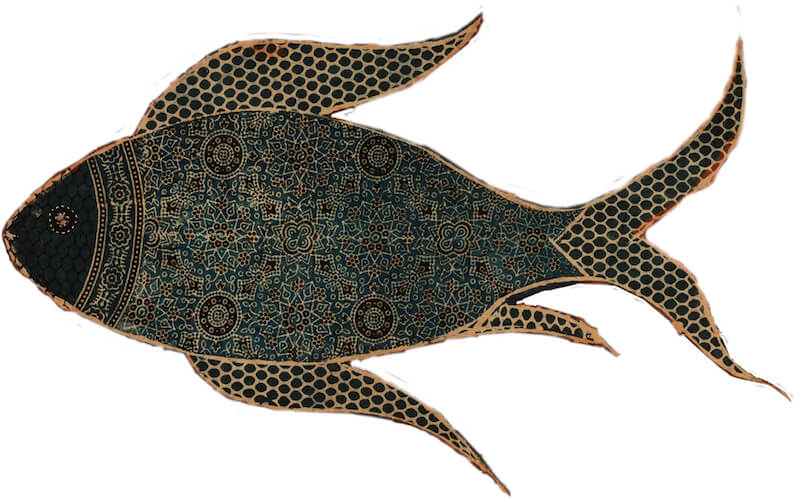 Jyoti draws our attention to the beautiful power of dedicated, righteous action as a means to addressing the challenges that face the world today.  She reminds us that perfection, of the sort that Gandhi hoped to inspire, cannot be mandated by elites or government, but rather derives from the purification of individual intention and action.  Although righteous action must begin at an individual level, Gandhi made clear that dharma cannot be performed simply for the self, but rather must be aimed at the service of others.  Service to others can inspire individuals not only to recognize our own duty to ourselves, but also to those around us.  Thus, Hind Swaraj could not be achieved by a single fish in isolation, but rather through a deep and meaningful connection established and maintained by a community.

Gandhi conclusively demonstrated to the world the power that resides in the individual who acts in the service of others and thus performs their dharma.  Shelly Jyoti’s moving tribute to this idea is communicated through art that evokes the sea, which figured so prominently in Gandhi’s life.  She reminds us both the incredibly important role to be played by each of us as individuals, especially as our action may inspire those around us.   Home-rule for the individual thus has the potential for home-rule for the collectivity.  Schools of fish in the sea produce currents and counter-currents that have the potential to transform the world. 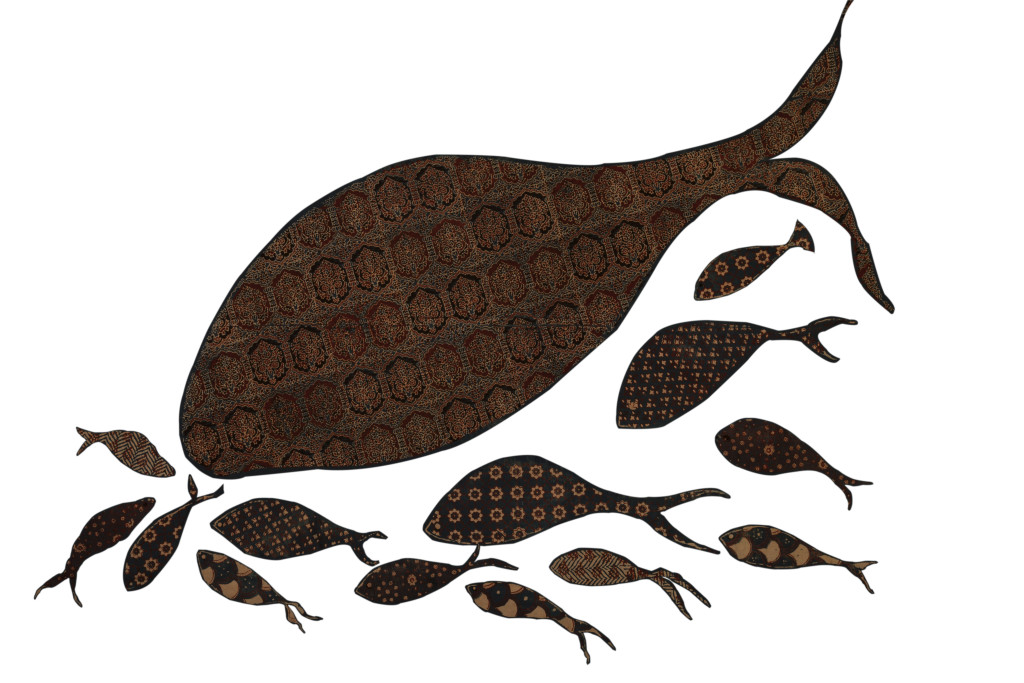